“GenderChill served as a fundraiser for the McKenzie Project, a Miami-based nonprofit organization that aims to uplift Black transgender and nonbinary adults in South Florida,” according to an FIU News writeup on the event.

GenderChill took place at the Biscayne Bay Campus and “honored International Transgender Day of Remembrance,” an observance for “transgender people whose lives were lost in acts of anti-transgender violence.”

“In a country where in 2021 at least 57 transgender and nonbinary, mostly Black and Latine, people were murdered, we are committed to changing that through consciousness-raising and appreciation for diverse gender expressions and bodies,” the event description reads.

Individuals 18 and older could register for the event so long as they checked boxes agreeing to give their “best effort” to calling people by their preferred pronouns, according to a screenshot of the page obtained by Campus Reform.

The event page also described GenderChill as an “experience to empower queerness” to  “support transgender, nonbinary, and gender non-conforming people.” 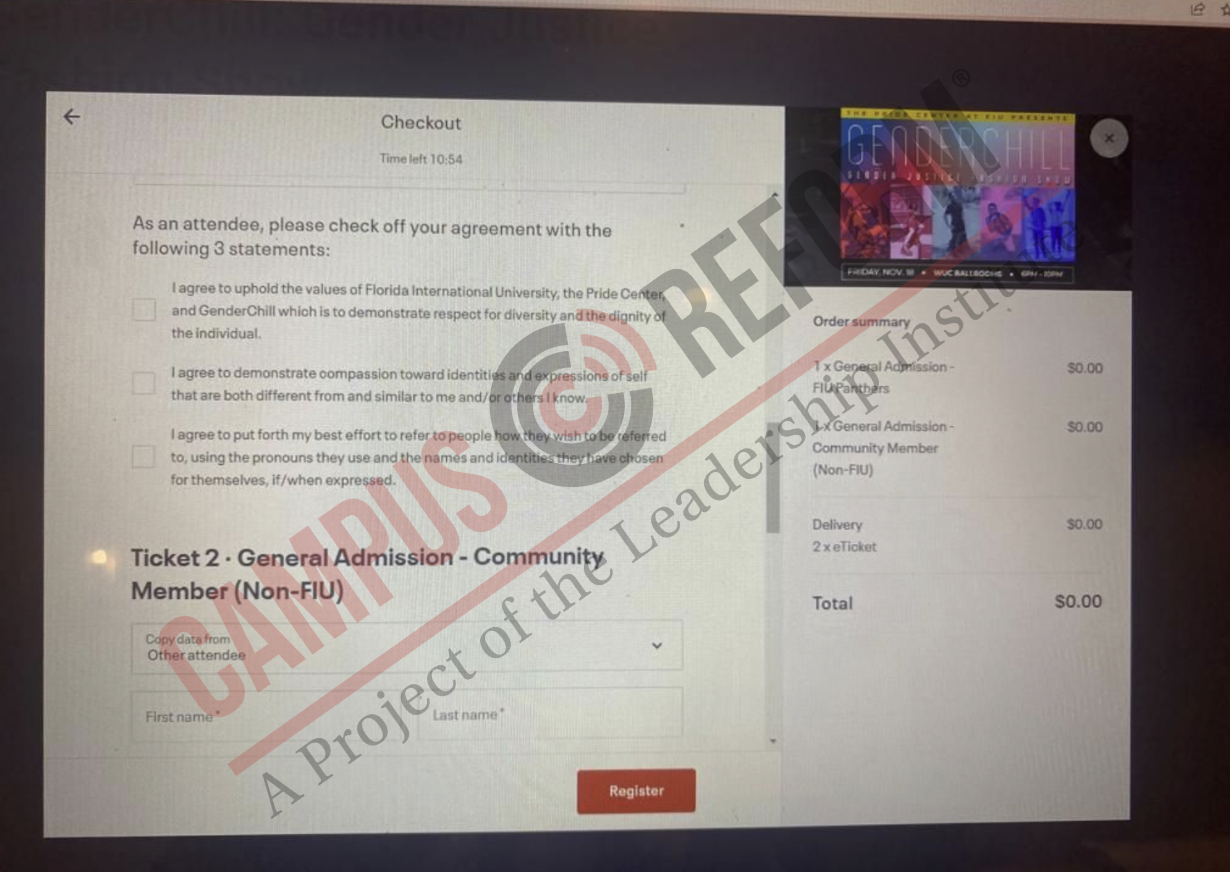 An event photo depicts horned women walking the runway side-by-side dressed in steampunk cosplay, or a style of costumes that combines Victorian-era and contemporary clothing in a look inspired by steam-powered machinery.

Pride Center Associate Director Dr. Erica Jayne Friedman began GenderChill with a Q&A featuring ALOK, a "nonbinary" author and speaker. “I have never been a girl. Anyone familiar with my life knows I am a non-binary transfeminine person who grew up a boy,” a 2021 blog post by ALOK reads.

Friedman aims to make “FIU the most supportive and affirming university for LGBTQIA+ students in Florida,” according to her FIU bio. Her bio goes on to state that she “personally experiences both their gender and sexuality as fluid.”

Jose Galvez, an FIU student, told Campus Reform that the “liberal and woke ideologies” promoted by his university “do not even represent a majority of their students.”

“FIU doesn’t sponsor and doesn’t promote any events in the conservative agenda and it’s obvious that the institution is biased and a left leaning [u]niversity,” Galvez said.

Galvez doesn’t agree with FIU’s policies requiring the use of preferred pronouns.

“I think it’s disrespectful to force students to use pronouns even when it’s something that morally they don’t agree with,” Galvez said.

FIU’s Chosen First Name policy allows “[a]ny faculty, staff, or student” to “identify a chosen first name and chosen pronoun in addition to their legal name.” The policy outlines procedures for those who feel that their “chosen first name has not been used in accordance with this policy,” including a link to the “Ethical Panther Hotline,” or FIU’s confidential reporting system for “compliance, suspected misconduct or unethical behavior concerns.”

In 2021, Campus Reform reported on the “Inclusive Language Guide” by the FIU Pride Center. The guide discourages the FIU community from “‘using heteronormative and binary language,’” such as the terms “husband” and “wife.”

Campus Reform contacted FIU, the FIU Pride Center, Dr. Friedman, ALOK, and the McKenzie Project for comment. This article will be updated accordingly.

Melissa Da Gama is a Florida Campus Correspondent studying at Florida International University. She is double majoring in political science and international relations with an undergraduate certificate in Human Rights and Political Transitions. Melissa has had the pleasure of interning for Marco Rubio as the Operations Coordinator for Rubio for Senate and is proud to be a Venezuelan-American fighting for the right side of history!

What you stand for is what defines you

Conservative students on college campuses are marginalized, threatened, and silenced by threatening students who oppose their views, or radicalized liberal professors or administrators. Campus Reform—and readers like you—are pushing back. Progressives would rather threaten you with violence, silence your conservative views, or call for you to be "canceled" from our society if you oppose them. They say your views are dangerous, hateful, fearful, or racist.

They have it all wrong. What we stand for defines us—it always has.

We can no longer remain silent. It is time for conservatives young and old to unite as a single voice to boldly proclaim what we stand for and oppose the mob.

Will you join with us, select the principles you stand for, and sign your name below?

I stand for the preservation of free speech all across our country—where I'm allowed to express my beliefs without fear of condemnation if my opinion differs from yours.
I stand for protections for conservative students who are illegally being threatened or silenced on college campuses all across our country.
I stand for the federal funding to be pulled from colleges and universities when they silence conservative views or students.