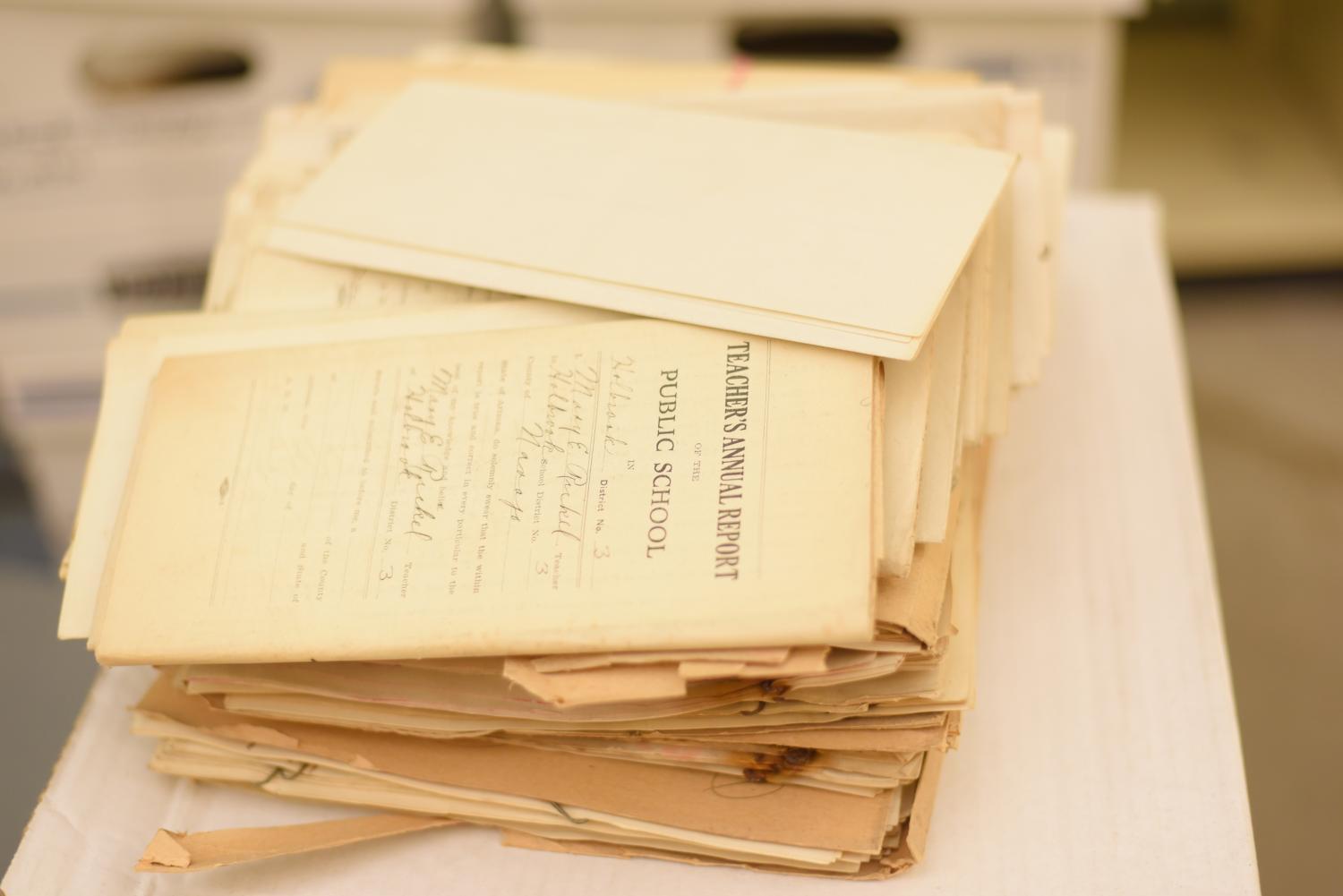 Ron Dungan/KJZZ
Inside the Polly Rosenbaum Archives and History Building in downtown Phoenix.

During the pandemic, a lot of businesses re-imagined themselves.
Local breweries shifted from kegs to cans. Restaurants focused on to-go orders.
But historians were also affected by the pandemic. Much of their work is done in libraries and archives, places where lockdowns didn’t get a lot of publicity.

“I’ve always had a passion for history. My dad would take us to ghost towns,” said Erik Berg, an Arizona historian who has published a number of articles in historical journals.
Although Google might want us to believe that all history is just a few clicks away, that’s not the case. Historians do use the internet, but they’re looking for new material, and you don’t necessarily find that online.
“I definitely like stories that haven’t been told, and for a lot of that means going back to primary sources,” Berg said.
That often means a trip to the archives. An archive is like a museum of historic papers. There are several branches of the national archives located throughout the country. Arizona has a number of collections as well. These collections might contain millions of documents. It can take days to find just one salient fact.
“But when you do find something particularly something unexpected, or, something that, like a document that goes into detail about the thing that you’re interested in. I mean, it is literally like you just found a gold nugget. You know, you shout eureka! And you found this document that maybe no person alive today has ever looked at,” he said.
The Polly Rosenbaum Archives and History Building was built in 2007. It’s a repository of tax rolls, newspapers, maps, court records and other government records.

Nadine Arroyo Rodriguez/KJZZ
The Polly Rosembaum State Archives and History Building at 1901 W. Madison in Phoenix. This is the home of the Arizona Archives.

Every document goes through a series of steps that begins when boxes are dropped off at a loading dock. Paper can last for centuries, if it’s stored properly. The documents are checked carefully when they come in.
“Water damage, anything that could potentially impact the records that we already have. And so bugs are always big, they love to eat paper,” said state archivist Laura Palma-Blandford.
The archive also has digital files, but changes in software and hardware can make those records hard to access as technology moves from tape to disc to thumb drive.
So, although paper takes up space, it’s accessible and can last a long time. Another format that has a long shelf life is microfilm. It can last as long as 500 years if stored properly.
It’s also so heavy that the floors where its’ stored have been reinforced.

Marcus Macktima, a doctoral candidate at the University of Oklahoma, was starting to do his dissertation on the San Carlos Apache reservation, where he grew up, when COVID-19 struck. Archives across the country closed.
“I had to figure out new ways of actually doing research. The majority of the places where we would normally go to, to do research were shut down,” Macktima said.
He found some material online, but he had to wait until libraries and archives reopened to get the rest. Some are dealing with a backlog. One institution told him they were two years behind. In Arizona, the state archive has reopened on an appointment-only basis.
Historians aren’t the only ones who use the archives. Members of the public look through these records for genealogy research, to find proof of land ownership, or citizenship. Deputy state archivist Carlos Lopez recalls one woman who came in looking for the birth certificates of her grandparents.
“I gave them a roll of microfilm and lo and behold that certificate was the very first thing on there, and so she was able to actually prove her citizenship and possibly avoid deportation,” Lopez said.
The Arizona History Convention will have its annual gathering in the spring. This year, a lot of researchers submitted papers. It’s not clear why that is, but it’s possible that they are finally getting caught up.
KJZZ is a service of Rio Salado College, and Maricopa Community Colleges
Privacy Policy | FCC Public File | Contest Rules
Copyright © 2022 KJZZ/Rio Salado College/MCCCD